Awareness of Ignorance is the beginning of Wisdom

Most of the people do not know the actual powers of water. They just think of water as a medium to quench thirst, bathing/washing and cooking etc. Unfortunately, some people even do not consider water a necessity for health. But in reality water is much more than that. By natural design (when water is its optimal state), it delivers and releases energy to each cell of the body while removing and eliminating waste. The molecular structure of water, H2O, and its unique physical (and metaphysical) properties, give it the quality of being an incredibly adaptable carrier of information.

When judging water quality, it is not only important to make sure there are sufficient biologically important minerals, the water's energetic state should also be considered. Most people think we have solved the problem of providing healthy drinking water for everyone. However, we force the water through chemical cleaning processes with toxic chemicals like chlorine added to it. When then press the water through pumps and pipes of iron, concrete or plastic without considering the consequences for the quality of water. Viktor Schauberger, who spent his lifetime studying the inherent properties of water, called the result of such treatment dead water.

Schauberger (scientist) observed the whirling motion of water in streams and rivers which meander and flow in a natural way, factors which are responsible for its bouyancy and self-cleaning abilities. He also recognized the importance of the vortex movement for the life-energetic properties of water.

There are number of many other yesteryear scientists that also did extensive research into extra-ordinary properties of water and their research is very well documented. Some of them are: Viktor Schauberger, Rudolf Steiner, Theodor Schwenk, John Wilkes.

Ability of Water to Store Information

Water can read, store, and transmit the vibrational pattern of anything, whether it is a physical object, an emotion or thought, or a spiritual being. The water always remains the same at the chemical level but at the energy and vibrational level it acquires a "memory" that it can both transmit and reproduce forever. This "memory" can then be used for all kinds of physical, psychological, and spiritual purposes. That means that we can influence water with the information we give it, and water can influence us with the information it carries.  Since a large proportion of our bodies consist of water, it’s no surprise that a specific frequency carried within the water, or the energy that we take into our bodies will quickly spread through the body and aura; therefore water is the best source for quick healing if vibrational/energy healing is to be performed. All water is sensitive to subtle energy vibrations. That is the reason that in almost all religion’s baptism involves water!!

This is also the reason that even if water is chemically filtered enough, it is still dead water with negative imprints of impurities and other negative electromagnetic forces. This is the working principle for all homeopathic medicines.

How Water Stores and Transmits Energy

One of the important properties of water is its ability to store and share information, and in particular photons. Bio-photons are weak electromagnetic waves in the optical range of the spectrum - in other words: particles of light (energy/information). All living cells of plants, animals and human beings emit bio-photons which cannot be seen by the naked eye but can be measured by special equipment. Cancer cells and healthy cells of the same type, for instance, have very different emissions of bio-photons.

Our cells contain 75 to 90% water. Therefore, our cells also emit bio-photons which control vital processes. DNA lies in the center of every living cell, surrounded by water. The DNA contains instructions on how the cell should behave and replicate in the form of light/energy via the surrounding water because water stores and shares information - from ALL energy sources, man-made or natural. The energy from our DNA gradually expands out from the center of the cell, spreading throughout the whole body via the water in our bodies. It extends beyond our physical bodies to the Auric or Biophysical field due to the water molecules in the air around us. This is how, through water, we and our energy field, interact and communicate with everything around us.

The bodily fluids transport “messages” throughout the body: the blood, lymph, cerebra-spinal and interstitial fluids all cues the body as to its general state. They do this through the quality of the substances carried in their liquid medium. If these fluids are sluggish thanks to toxic debris, the body will be in a state of disrepair. So, it is very important to drink LIVING water and not just dead water.

Vortex is Nature’s finest creative/organizing force which gathers and disperses the energy keeping the entire cosmos organized and alive. The vortex is primal source of movement in nature. Vortices are the result of a self-organizing flow where a substance rotates around its own axis with a decreasing radius. The speed of rotation increases toward the centre where a sub-pressure forms. Theoretically, the speed at the center of a vortex is infinite—capable of breaking through dimensional boundaries.

The largest systems all the way down to the smallest systems use the magic of the vortex to facilitate their activity; The Earth’s solar system rotates vortexially; The Earth moves on a wobble that evokes vortexial movement; Even DNA moves along a vortexial form; Fossils and shells illustrate vortexial form; Tornados; Spiraling growth of plants; Waves in the ocean; Fire; Water naturally forms vortices when flowing around stones and other object and so on. Vortex is Nature’s mechanism for increasing the quality of energy from a lower to a higher level. 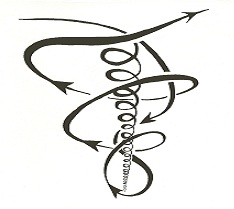 Viktor Schauberger saw life’s many processes as a part of an indivisible whole—linked by spiral movement. He identified two forms of motion in Nature:

When vortex is generated within water, then water draws the cosmic energy from universe. The water which runs through vortex, changes its structure. Structured water surrounds chemicals and helps them to be neutralized or not taken in by the body.  The chemical is still there, but it is in a different structure. Basically the toxins or unwanted things in normal water are pushed within the internal molecule of water and will not be absorbed by our body and will directly lead to elimination system attaching with them other unwanted things from human system.

It is not only the chemical property (H2O) of water that matters, but all the powers of water lay in its crystalline/structured state. It does matter how the hydrogen and oxygen are arranged in water molecule. e.g Both Charcoal and Diamond are chemically made up of Carbon but due to their crystalline structure of carbon atom both are entirely different things. All natural water is structured water.

Also much of the water in a healthy human body is in a liquid crystalline/structured state. Many components of the body are also considered to be liquid crystals, including collagen and cell membranes. These tissues work cooperatively with structured water to create an informational network that reaches to every cell. The liquid crystalline organization of the human body accounts for the instantaneous transfer of signals and other biological information. Healthy DNA is surrounded by structured water. This water is responsible for the DNA’s stability. Structured water is also responsible for supporting the electromagnetic field surrounding DNA. As water loses its crystalline structure (because of age and disease), the integrity of the DNA is often compromised. Youthful DNA, surrounded by crystalline/structured water, has a much stronger electromagnetic field than DNA from older individuals.

Once the water is structured, it acts as a superconductor for this cosmic energy. It is because water’s actual geometric shape is icosahedrons and icosahedron is one of the Platonic Solid which can resonate with energies of the Universe. Tap water or water from distressed environments is not structured and therefore not good for health. But there are various ways it could be restored (partially or fully) back to its original structured state.

How to Generate Structured Water

There are various ways to convert normal water to structured-water by using Vortex. Some of the known methods are:

Holy Water is spiritually charged structured water produced by either of the following. It is NOT required to first structure the water and then charge it with spiritual frequencies. Spiritual person or place can do it simultaneously.

Holy Water can be used for the prevention and therapy of any/all diseases, disequilibria, pathologies, to expand and transform consciousness. In order to reap benefits of holy water; one can drink, bath, spray some of it on your face, hands, or solar plexus (or any sensitive, painful, or inflamed part of your body). If one wishes to purify one’s blood with such waters, they should be used for about a month.

Holy Water can regenerate itself. All we need to do is to take 9 drops of them, put them in a bottle with one liter of tap water (preferably in the morning) and let them rest for 24 hours. During that time, the tap water will be transformed to “Holy water”. It means that 9 drops of “Holy Water” can go life-time.