Library of Mind, Body, and Soul

All matter, emotions, mind substance, and energies move by the three modalities of 0 (neuter), + (positive), - (negative) polarity. This is the cosmic picture of energy modality, demonstrated by the orbits of planets around a central sun. Everything in this universe is bipolar because the atom is bipolar in its function. Every atom has a neutron (neutral charge), proton (positive charge), and electron (negative charge). Positive and Negative charges dance around a nucleus or neutron charge, like a central shaft. Energy always moves in an oval shape and vortex. Energy travels from positive to negative via the neutral pole; energy must flow through its neutral pole to be balanced.

Human Body Polarity
The human body is a hologram of the universe. This means that the human body does operate on neuter, positive, and negative polarities. The human body has electromagnetic opposition along three main axes: Vertical (head to feet), Horizontal (right to left), and Laterally (front to back). All polarization is done from the front to the back, from side to side, from the above to the below, or from the superior to the inferior. 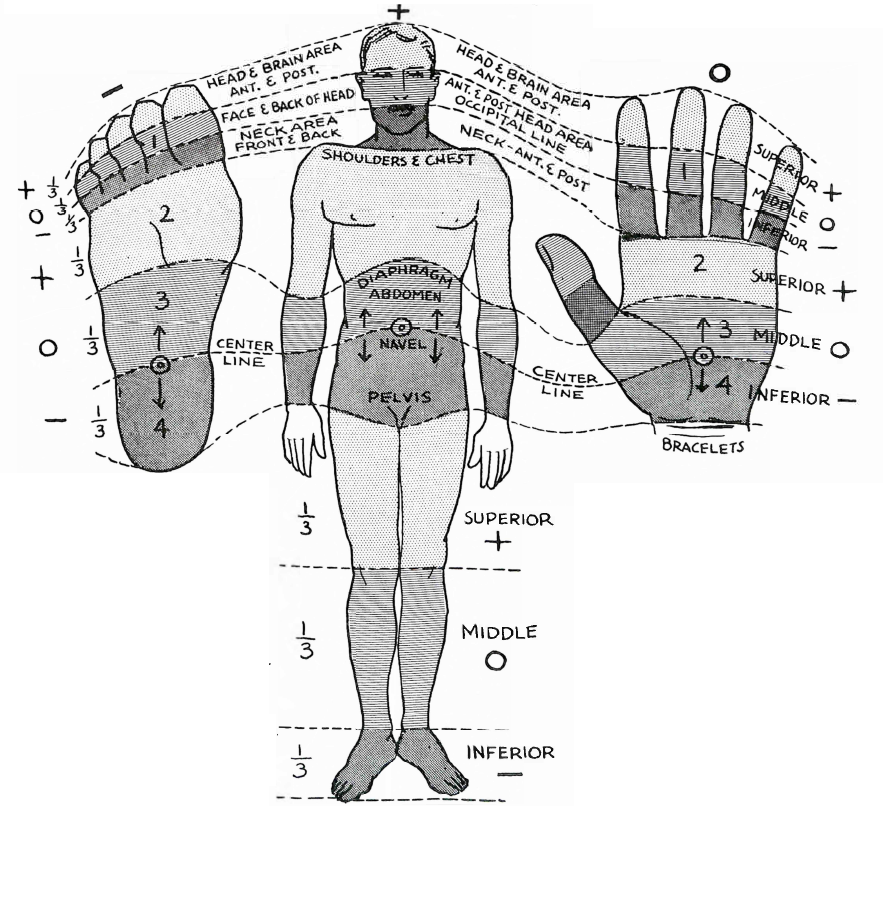 Even all organs have positive, negative, and neutral poles, as explained below:

The Creator gave everyone energy that flows from the center (solar plexus just like the Sun is the center of the universe) to the circumference and returns by polarity action. It also flows from within outward and from the top downward and returns by reaction or attraction from the surface to the center and from below to above. By these paths of energy or light waves and rays, we can reach cause and effect in the body and balance them within ourselves by mind and emotional polarity or balance, and with the hands, as energy polarity of the pranas or the five life breaths which animate the five senses, as sensory and motor functions. The fiery energy of the solar plexus may be harnessed to move congested Energy. For example, painful joints will often clear if navel contact is made with one hand and contact with the joint with the other.

A house rests on its foundation. So, does the structure of life in the human body rest on the vital force located at the base of the body, the pelvis. Its tissues are essential, and even the bony structure and articulations are crucial for all motion, action, and well-being. Many ills and pains that are physicians' despair originate in the pelvis.

The vital force has its base in the sacrum, which is the motor force in the pelvis. The rest of the body can share this vitality only if its currents flow over the body in standard circuits of finer energy waves. If it is blocked in circulation, the body’s entire vital economy suffers, resulting in ill health. When the pelvis is right, everything in the foundation of the body structure is correct. When the critical currents roll naturally in their orbits, there will be less tension, frustration, emotional upsets, and restlessness.

Egyptian Rods: It is simply a set of two cylinders: One represents Solar (+) power and is made of Copper/Bronze and Carbon; Another represents Lunar (-) power and is made of Steel/Iron and Magnet. Just hold the SOLAR (+) rod in the RIGHT (+) hand and the LUNAR (-) rod in the LEFT (-) hand. This setup will transfer psychic energy and balance all forces within the body.

Gold/Silver: One can also use Gold as Positive energy and Silver as Negative energy. Always remember that Gold should be placed on the superior part (it could be positive or neutral) and Silver on the inferior (which is negative).